Russian science and education: Graham has a recepie to make it better

Loren R. Graham enjoys talking about the reform of Russia’s educational system, after all, it is a subject he has been studying for over 50 years. MIT professor and scholar at the Russian Studies Center in Harvard, Graham has published almost 20 books on education in the Soviet Union and Russia including Science in the New Russia: Crisis, Aid, Reform, in 2008.

Loren R. Graham enjoys talking about the reform of Russia’s educational system, after all, it is a subject he has been studying for over 50 years. MIT professor and scholar at the Russian Studies Center in Harvard, Graham has published almost 20 books on education in the Soviet Union and Russia including Science in the New Russia: Crisis, Aid, Reform, in 2008.

Graham has also been involved as a consultant in negotiations between MIT and Skolkovo on forming a partnership to build a research center in Russia. Graham is very critical of the current state of scientific research and teaching in Russia, but he also offers a recipe for improvement. His views can of course be challenged, but they are certainly worth a discussion among Russian scientists and educational professionals. His main idea, merging teaching and research, has had some success in the United States, where it lead to the creation of one of the world’s most innovative educational environments.

Let’s start with the Skolkovo project. I interviewed you about this two years ago and I remember that you were quite critical. First, you did not like its proximity to Moscow, you thought it would be better if it was located a long way from the capital, as that would mean it could be replicated elsewhere in Russia. Second – because they decided against having an undegraduate educational establishment there. Two years have now passed, what is your opinion on what is happening there?

Both of those criticisms are still relevant, but I think that I have an even bigger criticism of Skolkovo, and that is that it is the kind of repetition of what Russia has done so many times throughout its history: trying to achieve a sudden spurt of modernization largely based on new technology. The problem with that approach is that it does not provide sufficient recognition of the need for social reform in order for technologies to be picked up, used, profited from and become part of the culture. That includes legal reform, economic reform, and social reform. If you ask me whether I think Skolkovo will fail, I would ask “for whom?” It could well be a success for some of the Western firms and organizations involved, of which my own university MIT is one, there are numerous western companies now involved, about 500 of them, including Siemens, Boeing, you name them. I think that they might find it useful and even profitable because there are very, very many talented Russian scientists and engineers. And I wouldn’t be surprised, for example, if some of the best eventually end up at MIT. MIT will do okay.

Interviewer: And what about the hope that will produce a chain reaction in Russia…

That was the hope, that it would affect society as a whole. That’s not likely to happen if Russia’s society stays as it is now. Just one little example: the World Bank ranks Russia 120th out of 180 nations in terms of how business-friendly it is. In other words, there are many factors in Russia that make it difficult to make a success out of a good technology in Russia. So, technological developments that come out of Skolkovo are much more likely to be utilized to somebody’s profit outside Russia than in the country, or if in Russia, then by Western rather than Russian firms selling them. So, I fear, it will help the West more than it helps Russia.

You have just been to conference in Yaroslavl on education in Russia. What are the major issues that were discussed there?

Well one issue that was discussed there was whether or not Russia is now seeing the fundamental transformation of higher education in science. The traditional pattern, as you are aware, was that universities were more pedagogical, at least compared to, say, American universities. That’s where the teaching happened. And research took place, more likely than not, in the Academy of Sciences or some other government institute, maybe even a military one. So research and teaching were not closely connected. Now there’s this effort I’ve been involved in now for 15 years, to try to take Russian universities and introduce a strong research element into them. This is a cooperative program involving the American foundation and the Russian government, and its governing council half Russian, half American, so it is fully mutual. We have been trying to get research implanted in the universities. We have had some success. But still, these research and teaching centers that we have established are still, shall we say, isolated elements of the broader scene.

Interviewer: what is the main problem, why can’t this approach be applied across the board as a general model?

First of all, research takes money: where will the money come from? In the United States, peer review awards often come from the National Science Foundation or other university organizations, that’s where the money comes from. Russia has a similar foundation: the RFFI (Russian Foundation for Fundamental Research). But to date the amount of the money it had at its disposal was so small that it has not been able to provide anything like the massive infusion of research money that its sister foundation provides in the United States. So if Russian Universities need research money, where will it come from? And will it be peer reviewed or not? These are really big questions

Interviewer: But Russia has separate research facilities, doesn’t it? Do you think that they have to be merged with universities or stay as they are, because they currently compete with universities for funds from the same source?

They do, to a certain extent, compete for the same money, but I think we now have enough world experience to be able to say with some confidence that the most productive research centers are places where research and teaching occur side by side. Let me give you just one example. Bill Gates, Michael Dell, most of the founders of the Google, or Mark Zuckerberg, are all drop-outs. And they dropped out as either undergraduates or new graduate students. That’s where the real creativity lies. But when you have a system like the Russian traditional system, where research was done in one place and the teaching was done in another place, you don’t have that kind of ferment and creativity that occurs when they happen in the same place.

Interviewer: Are your views shared by many specialists inside Russia?

The Yaroslavl conference was largely about that, and so we would be correct to say that more and more people in Russia are coming around to this opinion. I think it is still perhaps a minority opinion. But it is getting stronger all the time. However, just having the opinion, although a necessary step, will not solve the problem. You have to have both the opinion and the means to achieve it, and the means to achieve it means both money and structural reforms.

Interviewer: Can this money come from private organizations, from businesses?

Well to some extend yes, and in some countries, including United States, for example MIT, big pharmaceutical companies and so forth do put money into research universities, but even in the United States that is not the major funding source. The major funding source is the government on a competitive peer review basis. When people ask me “you keep talking about peer review, do you think peer review is perfect?” I answer that peer review can be compared with, what Winston Churchill said about democracy, “the worst of all systems except all the others.” That’s what peer review is. It’s the best we can come up with.

If I ask you about the share of government funding compared to private funding, should it be 80% 90% 70%...

I don’t have a figure in mind. I don’t want to be misleading. But it’s something in that order.

Interviewer: How many universities have now been part of your program?

The centers? In the program I am involved in there are 20. 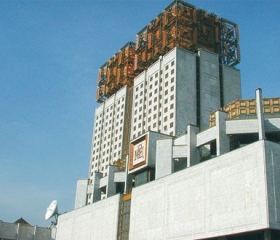 Interviewer: Any desire to increase this figure?

Well yes, the program is called a basic research and higher education program. Sponsored on the American side by the McArthur foundation and Civilian Research & Development Foundation (CRDF). And on the Russian side by the Ministry of Science and Education, and by local communities in Russia. It has been so successful that it is being duplicated elsewhere. So were feeling very good about that.

Interviewer: You mean elsewhere in other countries, or in Russia?

Well actually I was thinking of Russia. But as a matter of fact it is now being duplicated in other countries. In Russia it is being duplicated, but is this duplication always successful? Of course not. So, while we feel good about the program, it would be premature to say this is the much-needed fundamental reform, that it will really change things. We don’t know that yet.

This is a key issue. You’re talking in part about competition between the Academy of Sciences and the university system. The Academy of Sciences has tremendous talent. No question. So any kind of abrupt revolutionary effort to abolish it and place the research function entirely within universities would be a big mistake and would do tremendous damage. In my opinion, Russia should make a very subtle change. Whether it can pull it off or not, I don’t know. It has to launch a long-term program enabling universities to take on more and more of the research function. The time will come when good researchers would rather be in the universities than in the Academy.

Interviewer: And it would die a natural death...

It might die a natural death. It may need a little pushing here and there. And there are many ways this could happen. Some Academy institutes could become universities in their own right. Some could merge with existing universities; some could become national research institutes, you know, particularly those with clear military connections. There are many ways this could be done, but the trend should be to make universities, 20 years or 30 years from now, the center of research, rather than the Academy. But it should not be done in a revolutionary way.