Doctor of Philosophy, Head of the Center for British Studies at the Institute of Europe of the Russian Academy of Sciences (IE RAS)

The referendum on Scottish independence emerged as a key British political issue in 2011 after the Scottish National Party won parliamentary elections in Scotland. However, the SNP obtained a parliamentary majority due to electoral discontent with the Labour party rather than due to any broader desire for independence.

The referendum on Scottish independence emerged as a key British political issue in 2011 after the Scottish National Party won parliamentary elections in Scotland. However, the SNP obtained a parliamentary majority due to electoral discontent with the Labour party rather than due to any broader desire for independence.

Scotland appears to be significantly advanced along the devolution track, although the SNP's initial aim has to date been not so much independence as devolution max, i.e. the expansion of primarily economic rights, which boils down to the right to set VAT. That is why SNP leader Alex Salmond wanted to see two questions on the ballot: full separation or enhanced rights for Scotland’s population of five million (the UK has a total population of 63 million). He backed either separation or devolution max, since if the referendum were to fail, the Scottish nationalists would likely fall into oblivion.

However, the Conservative and Liberal Democrat coalition government in Westminster replaced those questions with an outright YES or NO, in exchange for a later referendum date, i.e. September 18, and the inclusion of the 16-17-year-old Scots (who may well have a less nuanced understanding of realpolitik). By then, Mr. Salmond hopes to win over the pro-independence majority and there seems to be every ground for success, because the proponents of independence have been gaining ground steadily since winter. Where they formerly stood at about 25-30-percent, now the proportion classed as “undecided” is contracting. At the same time, a poll in mid-May indicated more people backed unity rather than independence, which saw its share of popular support fall (Not the Best of Mornings for Yes?: New ICM and Panelbase Polls. Posted on May 18, 2014 by John Curtice). 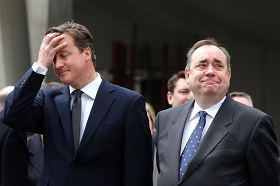 In fact it is the economy that the different sides in the debate use to substantiate their positions. The SNP claim that an independent Scotland could claim over 80 percent of Britain's North Sea oil and gas revenues, which is highly likely to become the subject of difficult negotiations with London. Some calculations indicate that, during the next six years, Britain could receive 54 billion GBP from hydrocarbon production taxes. But North Sea oil reserves are, estimates say, set to be depleted in about 40 years’ time, and Scotland would also face fluctuations on the oil market. Scotland would also have to take on a share of the UK's national debt - a share that is estimated at up to 80 billion GBP. Currently the two sides are enthusiastically debating the full spectrum of economic and social issues in the Scottish Parliament.

Scotland's EU membership is another sticking point, since the SNP shuns Euroskepticism, which prevails in Britain, and would like to join the Eurozone. Meanwhile, Brussels has ruled out internal membership talks, making it clear that Edinburgh would have to start the accession procedure from scratch. In opting for independence, the Scottish would have to retain the GBP, depending on London's fiscal and monetary policies, with rates set by the Bank of England. High credit ratings are also unlikely to hold, making international loans more expensive and hence hurting the economy. Britain, Scotland's main trading partner, would also become a foreign state.

Defense issues are by no means less significant. Mr. Salmond promises to rid Scotland of nuclear weapons and scrap U.S. ICBM-equipped Trident submarine base at Faslane, while preserving NATO membership. Meanwhile, Brussels insists on a full-fledged NATO accession procedure because the alliance cannot accept the removal of the nuclear assets from Britain. The UK Ministry of Defence has issued a report detailing the detrimental fallout of separation for both Britain and Scotland, warning that the new state would have to build its own armed forces – thus incurring a catastrophic drop in its security (Scotland analysis: Defence / HM Government. October 2013.)

While Euroskepticism is a British phenomenon, Europhobia is a largely English one. Both the Scots and the Welsh have grown used to this double identity (i.e. British and their own) and in that context, a third – European – identity is less problematic. 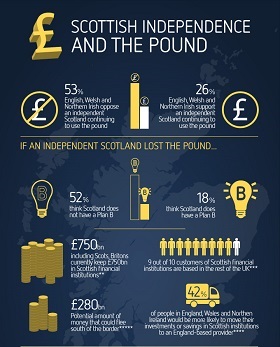 However, the very presence of EU and NATO umbrella structures seems to encourage regional separatism in many countries. This trend is chiefly rooted in economics, although other factors are also significant, in the complete absence of an oppressed minority. Hence, the Scottish referendum matters both to the UK and to Europe as a whole.

Notably, in anticipation of the referendum, Britain’s main political parties (the Conservatives, Labour, and the Liberal Democrats) have joined forces under the banner Better Together. On May 15-16, prior to the European Parliament elections, Prime Minister David Cameron visited Scotland to campaign against secession under the slogan The Best of Both Worlds. Gordon Brown, former Labour prime minister (and Scot), has also jumped on the anti-independence wagon.

However, it is the results of the elections to the European Parliament in late May that could still whip up the Scots' pro-independence sentiment, mainly because of the formidable advance of the UK Independence Party, which wants Britain to leave the European Union. UKIP has scored notable successes against both the Conservatives and the Labour party, making the Scottish wonder about their future in the United Kingdom.

British Euroskepticism has a long history. Respected British political scientist David Marquand maintains that "skepticism has morphed into phobia" based on "existential anxiety", while Europhobic rhetoric has nothing to do with politics and boils down to the identity problem. While Euroskepticism is a British phenomenon, Europhobia is a largely English one. Both the Scots and the Welsh have grown used to this double identity (i.e. British and their own) and in that context, a third – European – identity is less problematic. Arguably much like the Catalonians, Basques, Corsicans, and Flemish, the Scots are keen to shed the chains of the homogeneous nation state. However, the English are perplexed – as they now find themselves confronted with the notion that “English” and “British” are not synonyms, and have long differentiated themselves from Continental Europe (Marquand D. England's visceral Europhobia may break up the UK).

Brussels has ruled out internal membership talks, making it clear that Edinburgh would have to start the accession procedure from scratch. 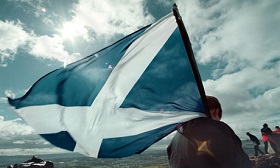 According to the Economist, British Euroskepticism is constitutional rather than economic, with Brussels offering British Parliament a financial carrot, while Britain seeks sovereignty and supremacy of national legislation (rather than costs). It seems that Euroskepticism is intrinsic to the Conservatives, who no longer seem a nationwide party, since they have essentially had no support from Scotland since Margaret Thatcher's era, and only one Conservative Member of Parliament from Scotland in Westminster.

UKIP's success in the European Parliamentary elections, which saw it take votes from all parties, but mostly from the Conservatives, should deepen the Conservatives' Euroskepticism. Labour supporters, who seem to be leading the anti-cessation movement, will have to face controversial messages from their electorates in Scotland and in England, where Euroskepticism is strong. As for Scotland’s showing in the European Parliamentary elections, the SNP failed to trounce UKIP, which for the first time won six European seats, and failed to beat Labour, with the SNP and Labour having two seats each and the Conservatives getting just one. Hence, Mr. Salmond can no longer claim unanimous support for Scotland's EU membership, while the British political parties are set to operate in the context of the 2015 general election, which will take place after the Scottish referendum.

It is hard to predict whether or not Scotland will remain within the United Kingdom, as the debate is becoming more intense. But whatever the outcome of the referendum, it is sure to have a significant impact on Scotland, Britain, the EU and NATO, hitting all of them as a ripple-effect.