Political Games Around US Military Equipment Exhibition in Chişinǎu

In late April – early May 2016, US troops and military equipment arrived in Moldova for NATO’s Dragon Pioneer 2016 Joint Military Exercises, which are to take place from May 3 to May 20. The United States brought 198 troops of the 2nd Cavalry Regiment and 58 units of military equipment. The situation is rather hot because the Americans intended to exhibit the US military equipment in Chişinǎu’s central square on May 9 (Victory Day), which caused protests on the part of the left-wing parties, and the S Party of Socialists of the Republic of Moldova in particular.

In late April – early May 2016, US troops and military equipment arrived in Moldova for NATO’s Dragon Pioneer 2016 Joint Military Exercises, which are to take place from May 3 to May 20. The United States brought 198 troops of the 2nd Cavalry Regiment and 58 units of military equipment. The situation is rather hot because the Americans intended to exhibit the US military equipment in Chişinǎu’s central square on May 9 (Victory Day), which caused protests on the part of the left-wing parties, and the S Party of Socialists of the Republic of Moldova in particular.

The US military presence is the topic of heated debates in Moldovan society. Virtually all of Moldova’s political leaders have weighed in on the issue – Minister of Defence Anatol Şalaru, the socialists, the leader of the Party of Communists of the Republic of Moldova Vladimir Voronin, Renato Usatȋi and representatives of the President of Moldova President. Essentially, the only politicians who did not comment on the situation were democrats Marian Lupu and Vladimir Plahotniuc. This is not surprising, however, given Plahotniuc’s recent visit to Washington and the meetings he attended at the US Department of State and the International Monetary Fund. Apparently, Moldova’s ruling Democratic Party prefers to stay silent and not to take a definite stance, so as not to alienate anyone.

The socialists spoke up against the US military presence quite sharply. Igor Dodon, the president of the Party of Socialists of the Republic of Moldova, demanded that an extraordinary parliamentary session be convened on May 10 and that the President be invited to attend. The Socialists believe that the US military presence in Moldova is illegal for several reasons: 1) there is no international treaty signed by the government between the Ministries of Defence of Moldova and the United States; 2) many American soldiers did not even carry military ID; 3) the Americans did not have permits to bring equipment and weapons into Moldova. The Socialists also declared they would use all possible means prevent US military equipment from entering National Assembly Square in Chişinǎu’s.

Ex-President Vladimir Voronin, leader of the Party of Communists of the Republic of Moldova, also called upon the United States to abandon its plan to exhibit military equipment in Chişinǎu’s central square on Victory Day. At the same time, his stance was not as harsh as that of the Socialists. His words may be taken to mean that since it might exacerbate the situation, he does not wish to see US military equipment in the centre of Chişinǎu. But this does not apply to all of Moldova. 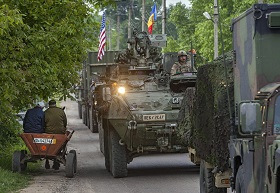 The country’s President Nicolae Timofti spoke in even vaguer terms. He welcomed the US military presence in Chişinǎu as a continuation of the tradition of the Allies, who had been members of the same coalition and who were now remembering the victims of World War II together. However, a representative of his Executive Office noted that “Moldova is not limited to Chişinǎu only. It would be expedient to hold this event elsewhere. But it is in no way a prohibition to hold an exhibition of military equipment in the central square of Moldova’s capital.” (Link in Russian.) This statement indicates once again that the presidency in Moldova has clearly seen better days.

It should be noted that it was the idea of Minister of Defence Anatol Șalaru to hold the exhibition of US military equipment exhibit in Moldova. It was his Ministry that had sent an invitation to the US Military. Şalaru is a minister from the pro-Romanian Liberal party, which is a member of the ruling Alliance. Of all the liberal ministers, he is the most consistent proponent of historical revisionism. In 2015, a Museum of Soviet occupation was opened on Şalaru’s orders, and he wanted to move Moldovan monuments to Soviet soldiers to that museum. Afterwards, he ordered a T-34 tank to be removed from its pedestal in one of the military units. Şalaru voices the opinion of a small fraction of Moldovan society, yet since political necessity dictates that the Liberal Party be represented in the alliance, his decisions meet no resistance from his political partners. Besides, the Liberals’ main ally, the Democratic Party, profits today from good relations with the United States, since it could weaken the opposition movement in Moldova. Therefore, officially, the exhibition of US military equipment in Chişinǎu was welcomed rather than condemned. 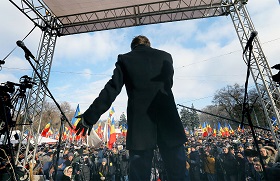 Yet unofficially, many politicians said that the exhibit could have taken place in the outskirts of Chişinǎu or some other city, rather than in the centre of the capital. For many people in Moldova, having US military equipment in the centre of Chişinǎu is not a symbol of the Allies’ victory in World War II, but rather a continuation of the Cold War between the USSR and the United States, with former enemies making inroads into Moldovan territory. The majority of Moldovan people who are outwardly oriented toward cooperation and integration with the European Union, inwardly still mistrust and fear western countries, and the United States and NATO in particular. These fears were reflected in the most recent public opinion Barometer released by the Public Policy Institute. The number of those in favour of European integration has dropped significantly to 36 per cent, compared to the number of those in favour of Eastern integration, which stands at 47 per cent. Only 11.4 per cent of the people trust NATO, the lowest figure in the entire history of these surveys.

Therefore, the arrival of US troops in Chişinǎu was welcomed rather by default and out of political expediency. At the same time, Moldovan politicians realized that the parade of US military equipment exhibit could potentially destabilize the situation. Yet the authorities must have believed it was still worth it. Despite the right wing’s displeasure with the warm reception accorded in Washington to Vladimir Plahotniuc, whom they resent, the right-wing opposition will not dare speak against the Americans, thus decreasing the degree of dissent and depriving the left wing of serious support. And the left-wing opposition will most likely protest against the Americans rather than against the authorities, which again could give the ruling alliance a much-needed respite.