Needed as Never Before: the Future of OSCE in a New Era of Old Challenges

Trust is the capital the organization still possesses against all odds. It is the necessary resource which enables the OSCE to marry conflicting interests and which the organization has to mediate between.

Over the course of the last forty years, the OSCE’s “area of responsibility” remains a zone of protracted conflicts. Certainly, the amount of violence in the region is less acute in comparison to other hot beds across the globe; however, the number and nature of potential conflicts on its territory give reason enough for careful consideration and urgent action. Be it dormant hostilities in the Balkans or Transnistria, the smoldering stand-off in Nagorno Karabakh, or the frozen conflicts in Abkhazia and South Ossetia – each bears tremendous destructive potential that could challenge the Euro-Atlantic security architecture.

There are at least two dimensions in the security composition of the region. ''Internally'', the sources of most conflicts stem from ethno-territorial disputes often complicated by a religious factor and rooted deeply in historical grievances dating back to the imperial or communist periods and exemplified by border demarcation disputes.

''Externally'', the conflicts emerge either as a side product of interstate competition or as a ''constructed reality'' vis-à-vis a perceived adversary. In this respect, the OSCE’s space remains an area of uncompromised rivalry between ''great powers''. The crisis in Ukraine has reversed this rivalry – whether between Russia and the EU or between Russia and the US – from a mode of competition to one of open confrontation. 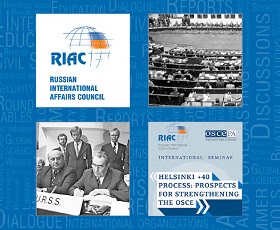 Andrey Zagorsky:
Strengthening the OSCE. Building a Common
Space for Economic and Humanitarian
Cooperation, an Indivisible Security Community
from the Atlantic to the Pacific

This is an important consideration when discussing the OSCE’s performance. The two prime points of criticism of the organization is that it is ineffective and politically biased.

Indeed, some past and current activities of the OSCE have proven to be less effective than expected. It may be as well understandable if the criticism is voiced by direct parties to a conflict that believe that their legitimate concerns are not addressed. Frequently, however, it is the so called great powers that lash out at the organization further using OSCE deficiencies as a pretext to hamper its operations in a conflict zone. Eventually if a peace process is derailed, the organization is often blamed as a scapegoat.

Nevertheless, during an era of exacerbated confrontation, re-energized national interest-based rivalries and re-emerging blocs, OSCE remains the only organization that is trusted – more or less – by all participating states. Merely because other security organizations, be it the US-led NATO or Russia-led CSTO, are deemed as representative of the political aspirations of a narrow group at best and serving national interests of the leading states at worst. In other words, regardless of criticisms, trust is the capital the organization still possesses against all odds. It is the necessary resource which enables the OSCE to marry conflicting interests and which the organization has to mediate between. Otherwise, it may make participating states less cooperative and more self-reliant – a dangerous path to follow when trying to resolve a multilayered international conflict. Furthermore, OSCE initiatives demonstrate a well-balanced approach, particularly when compared to the aforementioned security frameworks. The organization helps create a less conflicting state of affairs which is – again – the case when states opt to act unilaterally. 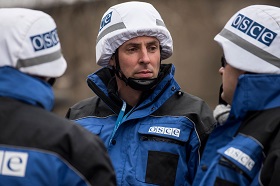 During times when practically all security issues are being politicized to an extreme, it is essential that the OSCE remain impartial. In the information age when all the sides, including OSCE officers, are bombarded with contradictory narratives and rhetoric, it is not an easy task to separate the wheat of legitimate concerns of a population from the chaff of government propaganda and embellishments. Since warmongers are often those who either expect little risk to their own security or hope to benefit from the conflict, it is critical to make sure that everyone concerned about the security of the region has a personal stake in providing its share of responsibility. Besides, OSCE participants must have a coordinating mechanism to minimize pressure on the activities of the OSCE from parties that may have ulterior motives in a conflict.

This leads to another aspect, which is that OSCE operations and performance are largely dependent upon the overall political context between its participating states – primarily between Russia and the West. Since the majority of the conflicts within the OSCE area occur in the post-Soviet space and the Balkans, the interdependence between the broader bilateral agenda between Moscow on the one hand and Brussels/Washington on the other and their relations in the ''shared neighborhood'' is indeed significant. Any political rapprochement, its speed and quality, to a great extent, will hinge on developments in the region. The reverse is also true: the situation on the other tracks of Russia-West relations will have an impact on the willingness of the two parties to compromise among themselves and together influence Eurasia’s political process in the long-term. As long as the two parties perceive one another as part of the problem rather than a part of the solution conflicting dynamics of the region will multiply. 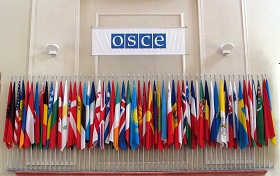 www.balkaneu.com
Sergey Rastoltsev:
The OSCE's Role in a Changing World: New
Steps for the Future

So far most states demonstrate only a selective engagement – cooperating discreetly on some pressing issues, until the agenda exhausts itself, before returning to their standing grievances. Meanwhile the term ''cooperation'' in the name of the organization is meant to emphasize its partner status. It's not a mere linguistic nuance but rather an indicator that the only alternative to this kind of relationship in a regional problem-solving system is a “regional empire(s)'' whose aspirations focus on extending their own personal security at the expense of others; security, what is referred to in game theory as a security dilemma.

The idea of mutual security in the OSCE space isn't new. Yet the current political reality exposed that few understand its true value. None of the responsible stakeholders can feel safe by ''multiplying security'' for itself and thus depriving others of it. In this respect, security is in the interest of all and not the position of one or few.