Doctor of Political Science, Professor, Head of the World Politics Department of the Higher School of Economics

The 38th G8 summit was held in Camp David, Maryland, United States, on 18–19 May 2012. Not much was expected from this summit, even though this was not connected with the fact that Vladimir Putin did not go there. The world is frozen in anticipation of the outcome of the Greek debt crisis. Neither sovereign wealth funds, nor central banks of major powers are conducting major operations: all are waiting for the outcome of the eurozone fate.

The 38th G8 summit was held in Camp David, Maryland, United States, on 18–19 May 2012. Not much was expected from this summit, even though this was not connected with the fact that Vladimir Putin did not go there. The world is frozen in anticipation of the outcome of the Greek debt crisis. Neither sovereign wealth funds, nor central banks of major powers are conducting major operations: all are waiting for the outcome of the eurozone fate.

G8 are waiting for agreement on the Greek issue, and further developments. Strictly speaking, the G8 relies on its own "expertise", it is not an economic forum. A few years ago the G8 gave way on global economy and finance to G20, and it has concentrated on issues of world politics, but, of course, it is impossible to completely separate politics from the economic and financial issues of the modern world. The political implications the euro zone crisis are now visible, and in the case of adverse developments they are much more profound. However, the leaders of world politics are still hoping for the best, and prefer being guided by the principle of "do no harm" and are limiting themselves to general calls for stability. 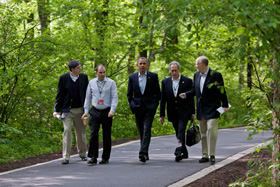 You could criticize the passive participation in G8, since in recent years the G8 summits are generally characterised by modesty and silence. The key events unfolded in recent decades in the economic sphere have caused havoc whilst today world politics is in a period of calm - it is possible that this is calm before the storm situation - when the shifts in the world-system are accumulating and the tectonic plates have not yet started moving. When they finally do, the G8 summits will remain in history. Historically G8 began meeting to outline ways of reforming the world monetary system and ways to combat the energy crisis (1975), discussed the debts of developing countries (1983), discussed the situation in the Soviet Union around (1990) and ways out of the 2008 global financial crisis (2009).

The current summit will not be included as one with great historical significance: the world's leaders became acquainted with the new French president and his ideas to stimulate economic growth, the British Prime Minister continued his debate with Merkel on "spend less or earn more", Barack Obama played the cordial host, but his thoughts were busy with the election campaign in the USA. The summit adopted a standby position, with pre-prepared decisions to support private investment in agriculture in developing countries, especially Africa, but this statement can not be considered a breakthrough. First, it is a fairly modest scale ($3 billion investment, taking 50 million people out of their half-starved existence by 2020) and secondly, the decision was taken in L'Aquila (Italy) a couple of years ago.

So was there some discussion during the May summit on something really important, the ability to formulate a common vision of the important issues in world politics and global security?

Beyond the summit’s fields: the fate of the euro

But it is clear that, the idea of European unity, stability and a lack of conflict can be in real danger: the first time the European integration process has reversed.

The main issue in world politics today is the state of the world economy, and the leaders of the G8 paid special attention to it. It will be recalled that the discussions at Camp David took place in the background, on the one hand, news of the failure of the Greeks to form a competent responsible government which would be able to conduct a focused economic policy, and ever more frequent statements from high-ranking German politicians that Greece, under these conditions could not be saved. On the other hand, in Europe, the debate has intensified between proponents of economic strategy to overcome the debt crisis, Merkel (to cut costs, to save) and adherents of policies to stimulate economic growth (F. Hollande, D. Cameron). After the question of the possible withdrawal of Greece from the euro area the policies have seen other problems, only partly related to economics and finance. If events develop according to the worst-case scenarios this could be a precedent for countries to leave the euro zone. This is not the same as the exit from the European Union, but it is clear that, the idea of European unity, stability and a lack of conflict can be in real danger: the first time the European integration process has reversed.

This may lead to the creation of a single European state with a unified fiscal and budgetary policy, a single minister of finance and a truly unified currency in the not too distant future.

Another issue which even more important; how to ensure sustainability of the European Union, including increasing the resistance of the euro area, due to the crisis in the economies of Spain, Italy, Portugal? If the financial crisis dominoes fell further - and there are signs of this already - the current degree of integration of the euro-zone will not be enough to prevent collapse. It is impossible to allow the financial collapse across southern Europe, it would mean the end not only of the single European currency, but also of the entire European Union. This means that Europe urgently needs to consolidate even tighter. 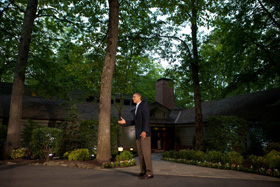 Photo: White House
The areas of this consolidation are clear. First, you need to distribute the risks of debt equally among all participants in the euro area, i.e., to transform the national bonds into European bonds, so that the obligations will not fall on each country separately, but on Europe as a whole. Such a scheme would mean that the obligations of, say, Spain will be met, among others, by the Germans - this is the biggest political issue that must be addressed. Secondly, there is a need to do something about the guarantees for euro deposits in banks, to stem panic. To solve this problem an option has been suggested whereby the European Central Bank will guarantee deposits in commercial banks, but such a move would require changes in the ECB statutes and this is also a major political issue. Finally, even these issues go by the wayside as their solution will require a fundamental reform of national tax and budget systems. This may lead to the creation of a single European state with a unified fiscal and budgetary policy, a single minister of finance and a truly unified currency in the not too distant future.

The outcome of the summit

There are many items in the final declaration of the Camp David summit, but the world leaders did not accept any statements that were suitable for the front pages of leading newspapers.

The discussions at Camp David could not answer these major political and economic challenges, as by definition: the fate of Europe's future needs to be resolved by the Europeans, so the final summit declaration was very vague. Nevertheless, it is clear that the leaders of world politics are in favour of preserving the euro area, supporting the idea of incentives in Europe and the world economic growth, while warning of the conduct of inflationary policies. The G8 summit also supports reasonable economy measures (Germany’s policy).

The second issue, which is reflected in the final declaration of the summit, is energy security and combating climate change. The G8 continued to encourage the introduction of energy efficient technologies, renewable energy, and announced that in 2015 it expected to formulate an international protocol to fight climate change on the basis of the so-called Durban platform [1], which would suit both developed and developing countries. 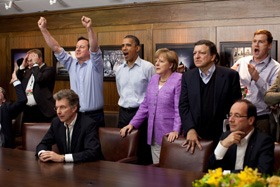 The third group of serious political issues, discussed at the summit, was the issues of economic development in Afghanistan and the countries of North Africa after the "Arab spring". In this section of the declaration the expected speech in support of economic development in these countries can not only be seen, but also a promise to return "stolen assets" (meaning, of course, North Africa) to the legitimate governments of these countries.

The fourth group of questions is the reaction of the G8 leaders to the acute political problems of the modern world. The summit declaration contains a call to the Government of Syria and all the parties of the conflict to adhere strictly to the conditions of the Annan plan, calling for Iran to comply with UN Security Council resolution and the terms of the NPT, calling for North Korea to stop provocations and implement UN Security Council resolution, support for democratic initiatives in Burma (Myanmar), coupled with promises of economic aid and investment.

There are many items in the final declaration of the Camp David summit, but the world leaders did not accept any statements that were suitable for the front pages of leading newspapers. However, the summit made a strong impression that many of the critical issues associated with Europe, and other problems of today were in a state of unstable equilibrium. The world leaders are scared that their statements may upset this balance and therefore either choose to remain silent, or limited themselves to a sufficiently streamlined formulation.

1. At the 17th UN conference on combating climate change in December 2011 it was decided to prepare for the signing of a new international protocol to the 2015 and sign it by 2020.

Rate this article
Share this article
FOLLOW THE LATEST DEVELOPMENTS
Project
Raising the Efficiency of Russia’s Participation in G8, G20 and BRICS
Tags
Syria, G8, Crisis, European Union
Reader's choice
HideShow
A Bumper Year for OFAC
Four Pieces of Advice to Emmanuel Macron about the INF Treaty
Sanctioning the Pipelines: Implications for Russia, the EU and the U.S.
Challenges to International Stability in 2020–2025
Challenges to Eurasian Security in the Coming Decade