The Daredevils of Sasun

EPA/VAHRAM…
EPA/VAHRAM BAGHDASARYAN/PHOTOLURE
Protesters clash with police near a police
station that was seized on 17 July in Yerevan,
Armenia, 20 July 2016
0
3170
Add Reader

For a whole week now, Armenia has been in the midst of a political crisis triggered by the seizure of a police regiment building in the Yerevan district of Erebuni by a group of armed men calling themselves Sasna Tsrer early on the morning of July 17, 2016. Any misstep on the part of the authorities or their opponents would be enough for the situation to spiral out of control. Unless proper conclusions are drawn, the consequences could be dire not only for Armenia, but for the region as a whole.

Why an Armed Incident Triggered a Political Crisis in Armenia

For a whole week now, Armenia has been in the midst of a political crisis triggered by the seizure of a police regiment building in the Yerevan district of Erebuni by a group of armed men calling themselves Sasna Tsrer (which may be translated as “the daredevils of Sasun”) early on the morning of July 17, 2016. In the course of a shootout with the police, several people on both sides were wounded and one high-ranking police officer was killed. Social networks broadcast the armed group’s appeal for people to come out into the streets in support of an “uprising”, demanding the resignation of the President and the release of those whom the group claims to be political prisoners. These include veteran of the Nagorno-Karabakh War Jirair Sefilian, leader of the Founding Parliament opposition group, who was arrested a month ago on suspicion of plotting an armed coup. Eight people were taken hostage, including two high-ranking police officers. During the week, all the hostages were released in exchange for journalists being granted permission to speak to members of the group. At the same time, mass protests calling for the resignation of President Serzh Sargsyan began in Yerevan. The mostly peaceful protests saw isolated clashes with the police.

Who are the Daredevils of Sasun?

At the moment, the mass protests have no clear leader.

The name of the armed group, Sasna Tsrer, translates as “the daredevils from Sasun” [1]. The heroes of the Armenian epic David of Sasun, known to every Armenian schoolchild, defeat powerful enemies despite being outnumbered by the enemies and betrayed by their cowardly fellow tribesmen.

The Founding Parliament movement, to which many members of the armed group belong, combined in its political rhetoric criticism of social inequalities, charges of official corruption, demands for democratic change and a tough stand on the Nagorno-Karabakh issue. The movement is neither pro-Russian nor pro-Western; in general, it tries to steer clear of the problems between Russia and the West, its priority being the removal of a government that is “against the people” and preventing any concessions on the Karabakh issue. The members of the movement believe that there is no point in taking part in elections, which they claim are rigged. Until recently, the group advocated non-violent methods of spreading their message, such as civil disobedience and peaceful street protests. 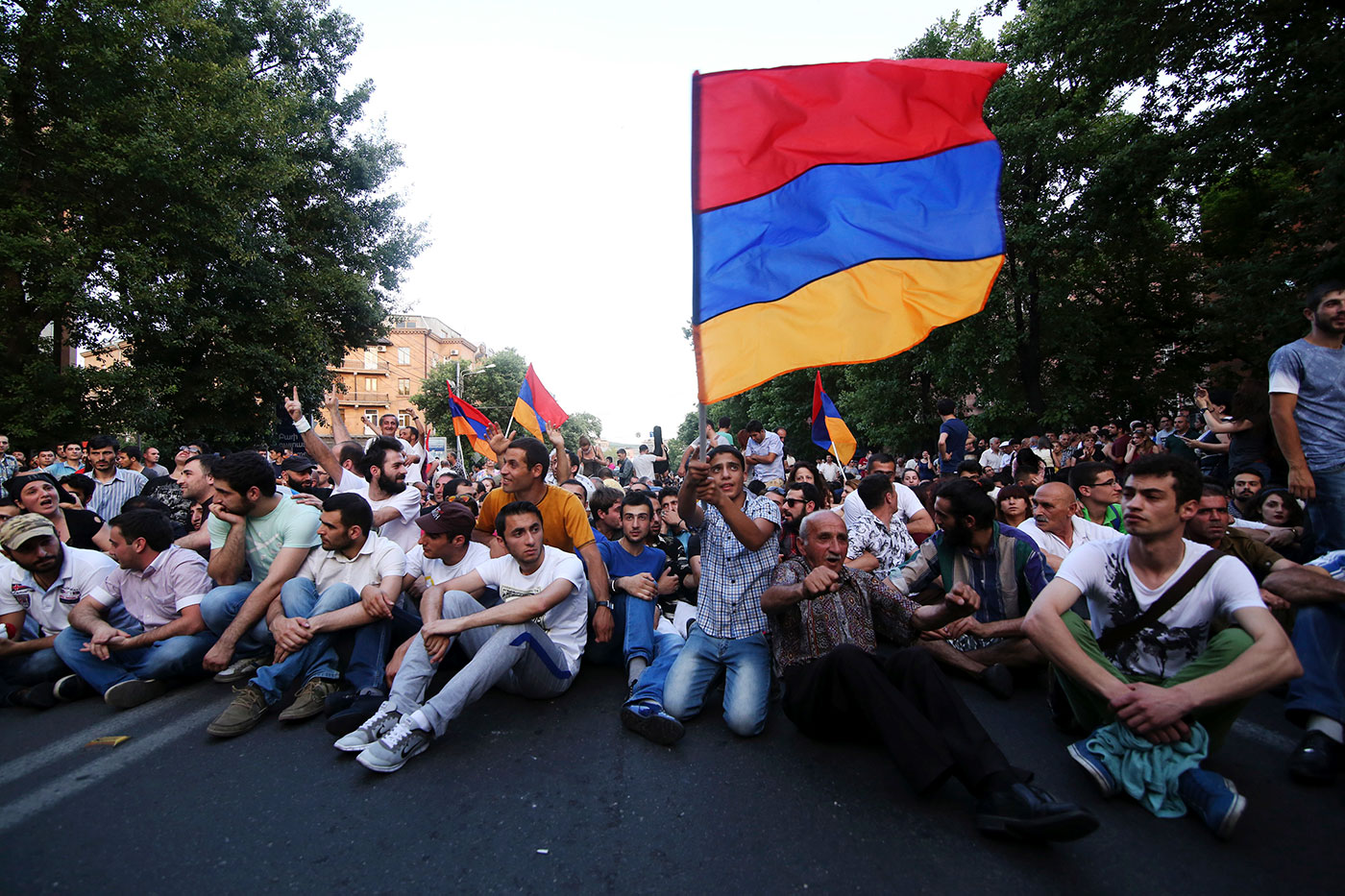 Judging from the reaction of the authorities, the incident caught them by surprise. In fact, their own inept actions are partly to blame for the escalation that followed. On July 17, 2016, in the initial hours after the clashes began, some internet providers blocked Facebook and Twitter. The ban was soon lifted, however, as the authorities soon realized that switching off the networks could be counter-productive. On the same day, mass arrests of opposition activists began. People were detained (sometimes indiscriminately) in the streets of Yerevan, for example, on Ploshchad Svobody (Liberty Square) to prevent rallies and demonstrations.

The result, predictably, turned out to be the exact opposite. While on the first day of the showdown in Yerevan the city was calm, the second day saw a rally in the city centre. The participants headed for the Erebuni District to the besieged building of the police regiment. Clashes with police soon followed in the immediate proximity of the regiment building, and more mass arrests and detentions were made. The unrest spread into the neighbouring quarter of Sari Takh, where a conflict broke out between the police, which had sealed off the district, and local residents. Pictures and videos of the clashes, reminiscent of scenes from the Arab Spring, instantly spread through the social networks. This served only to escalate the situation.

Perhaps the most alarming signal for the authorities was the reaction of the people. In general, street protests are not uncommon in Armenia, but until recently Armenian society has been highly intolerant of any manifestations of violence, including violence directed against the authorities. So it probably came as a bit of a shock for the authorities that the mutinous actions in Erebuni, far from being roundly condemned by the public, on the contrary, sparked off a new wave of anti-government sentiments. The widespread view was that, although the methods used by the armed group were unacceptable, at the end of the day their demands are justified. Some parties and social organizations, as well as prominent personalities, have called on the authorities to refrain from using force and to resovle the situation peacefully.

Who is to Blame and What Should be done?

The movement is neither pro-Russian nor pro-Western; in general, it tries to steer clear of the problems between Russia and the West, its priority being the removal of a government that is “against the people” and preventing any concessions on the Karabakh issue.

So strong were these sentiments that the authorities could not ignore them in their actions and public statements. The country’s leaders and members of the ruling Republican Party did not make any comments during the first five days of the confrontation. It was not until July 22, 2016 that Serzh Sargsyan commented on the situation, declaring that problems could not be solved by violence. Significantly, he never referred to the armed group as “terrorists”, even though this was the term used by some pro-government media outlets.

Somewhat surprisingly, the authorities were effectively backed by one of the most influential opposition leaders, the first President of Armenia Levon Ter-Petrosyan. He called on Jirair Sefilian and his supporters to think twice about the consequences of their actions for the Armenian state, especially in light of “the need to ensure the security of Nagorno-Karabakh and settle the Karabakh conflict”.

However, not all the politicians followed suit. Prominent opposition figure and Armenian National Congress member Nikol Pashinyan, addressing the rally in Erebuni, called for a new non-violent movement for the resignation of Serzh Sargsyan. Moreover, Pashinyan accused Sargyan of being ready to make unilateral concessions on the Karabakh issue, claiming that Ter-Petrosyan supported these concessions. The authorities were also criticized by the Unity Party led by the former foreign minister Vartan Oskanyan, who is thought to be a close ally of the Second President of Armenia, Robert Kocharyan (Kocharyan himself has so far kept silent). However, the members of the armed group hastened to dissociate themselves from Pashinyan and other politicians, pointing out that no one had authorized them to speak on their behalf. So, at the moment, the mass protests have no clear leader, which further complicates the situation. 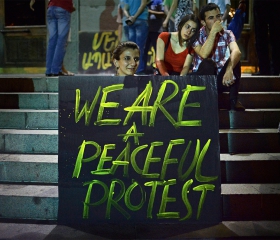 Why has the situation in Armenia become explosive at this particular moment in time? Problems have been building up for years, but two events in recent months have brought the situation to a head: the December constitutional referendum and the flare-up of tensions in Nagorno-Karbakh in April.

The December referendum that turned Armenia from a presidential into a parliamentary republic was seen by many in Armenia as preparing the ground for Serzh Sargsyan to remain in power after the end of his second term as president. Of course, such things are not unknown in the former Soviet countries, but Serzh Sargsyan clearly does not have the resources to hold on to power that his CIS colleagues have. Unlike Alexander Lukashenko, for example, Serzh Sargsyan can hardly be called a charismatic leader. Armenia does not have hydrocarbon resources, which some Central Asian leaders use to buy the population’s loyalty. Nor is there the threat of Islamic radicalism, which the same leaders use to scare their own citizens and the international community. Although Armenia has been spared an economic slump, the socioeconomic situation in the country is steadily worsening. Hundreds of thousands of Armenians solve their social and economic problems by going to work in Russia.

Until recently, the Nagorno-Karabakh issue was an important factor legitimizing the authorities. The opposition had little to counter the argument that, for all the internal problems in the country, the Nagorno-Karabakah issue on the whole was being handled in way that favoured Armenia, and that any abrupt changes could make Armenia lose ground on the issue. However, the events of April proved to be a game changer on the issue. The so-called “four-day war” showed that the high level of corruption and shortage of budget assets were affecting the security interests of Armenia and Nagorno-Karabakh. Besides, the events gave a push to the negotiating process, with many arguing that the status quo could not be maintained and the Armenian side had to make concessions. In all likelihood, it was the widespread rumours about possible unilateral concessions that triggered the latest events.

The situation is under control: clashes and protests have been localized and the majority of those who support the actions of the armed group on social networks are in no hurry to take to the streets themselves.

In any case, the talks between the armed group and the authorities continue. Trying to resolve the situation by force is fraught with risks because the group is well-armed. What is more, it includes people who are regarded as heroes of the Nagorno-Karabakh War and who command great respect in society as a whole and within the armed forces. Therefore, the authorities are likely to take a wait-and-see approach, especially since on the whole the situation is under control: clashes and protests have been localized and the majority of those who support the actions of the armed group on social networks are in no hurry to take to the streets themselves.

And yet any misstep on the part of the authorities or their opponents would be enough for the situation to spiral out of control. Even if a relatively painless way out of the situation is found, the events are a wake-up call for the Armenian authorities. Unless proper conclusions are drawn, the consequences could be dire not only for Armenia, but for the region as a whole.

1. The name can also be translated as “madmen from Sasun”, because Tsur in this context combines the meanings of “brave” and “reckless.”