Africa in one hundred years

Doctor of Historical Sciences, Leading Researcher at the Institute of Africa of the Russian Academy of Sciences

The borders of African countries, drawn along parallels and meridians by the French and the British at the dawn of the colonial era, certainly, will be changing dramatically. It is understood by everybody. This is what the President of South Africa Thabo Mbeki meant when he was speaking before the Parliament of his country on the eve of the first summit of Heads of States and Governments of the African Union in July 2002 in Durban. As a matter of fact, the process of redrawing borders has already begun. The question is only how and what factors in the long run will influence the changes of the Black continent's political map in the foreseeable future.

The borders of African countries, drawn along parallels and meridians by the French and the British at the dawn of the colonial era, certainly, will be changing dramatically. It is understood by everybody. This is what the President of South Africa Thabo Mbeki meant when he was speaking before the Parliament of his country on the eve of the first summit of Heads of States and Governments of the African Union in July 2002 in Durban.

As a matter of fact, the process of redrawing borders has already begun. The question is only how and what factors in the long run will influence the changes of the Black continent's political map in the foreseeable future.

Many authors begin their reasoning about the borders of African states with the passage concerning a fatal mismatch of political and "ethnic" boundaries seeing in it, perhaps, the main source of conflicts on the continent. There is an illusion, though, that in case of coincidence of these boundaries there would be peace and order in Africa. The source of internal conflicts generating separatism of individual territories and threatening the integrity of African states is also traditionally seen in their "polyethnicity". Some researchers believe that in case of transition from 'multiethnic' states to the model of "ethnic federalism" all conflicts in such countries will be resolved. These ideas stem from the so-called Soviet ethnos theory, developed by Soviet ethnologists on the basis of Stalin's "theory of the nation".

It should be noted, that in the second half of the last century in Western social anthropology there dominated the view, according to which "ethnic groups" are only "imaginary communities", "intellectual constructs."`

We can speak about "ethnic" features of political boundaries in Africa only when we mean boundaries between the archaic tribal groups which our Western colleagues sometimes call "ethnic". But here the "ethnic" sign is consanguinity of the group’s members, and the common totem. 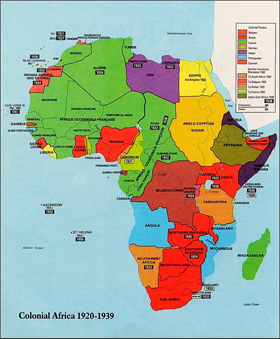 "Ethnic" connotations, in an attempt to interpret territorial claims of African countries to each other and the fragility of boundaries between them, emerge as epistemologically untenable and able to only obscure the real causes and nature of a conflict. As it was noted by a French geopolitiсian J. Ancel, "the border has got only a relative value, in accordance with the function that it should perform, according to the groups, that it embraces, and which they tend to support ".

By attaching to a conflict a meaningless token "ethnic", we do not bother to provide correct definition of the nature of a conflict, whether it is the struggle of the elites for power, territorial dispute or the war for access to resources, a conflict of proselytes of different faiths or a confrontation of various life-style systems (nomads versus the farmers, for example), etc. And it is difficult to understand over what boundary function in each particular case there is a dispute between the conflicting communities.

According to an American researcher R. Peters, "the most arbitrary and unnatural boundaries in the world are in Africa and in the Middle East. Drawn by self-seeking Europeans, ...boundaries in Africa continue to serve the cause of millions of local residents' death". On the continent there are at least thirty longstanding smoldering territorial disputes. In his book on political geography V.Kolosov presents data according to which various territorial disputes in Africa today affect about 20% of the continent's territory. In addition, 40% of the entire length of borders is not demarcated, 44% are drawn along parallels and meridians, 30% - by arched and curved lines, and only 26% are natural boundaries, partly coinciding with "ethnic" borders.

Established in 1963, the Organization of African Unity being aware that any attempt to change a border could lead to unpredictable consequences, urged to consider these borders inviolable, no matter how unfair they might be.

The era of post-modernity has added fuel to the situation. The process of changing of the boundaries' configuration on the African continent is unfolding before our eyes. The peculiar feature of the time is the fragmentation of the existing states, with separatist movements being able sometimes to win support from the outside. 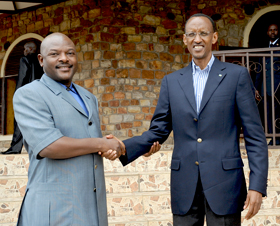 The precursor of the fragmentation of states in Africa was, apparently, the split of the Ethiopian Federation, institutionalized in the 1950 by the UN resolution. The Eritreans had previously claimed the independence of their country. Formed in the late 1950s, the Eritrean Liberation Front (ELF) began an armed struggle for independence in 1961. In response to it the Emperor of Ethiopia Haile Selassie deprived Eritrea of the right for autonomy. In 1988-1991 there was a civil war in Ethiopia, and in May 1991 the government was forced to leave the country. Following the agreement with the new Ethiopian government in April, 1993 there was held a referendum in Eritrea, upon the outcome of which the country was officially declared independent. In July, 1993 the presidents of the two countries signed a cooperation agreement. But the boundary line between the two countries has remained a matter for controversy. There were separate clashes at the end of 1997 in the disputed area of approximately 400 km2 in the province of Tigray. On May 12, 1998 Eritrean forces invaded Ethiopia and occupied most of the borderline area of Badme. The fighting between Ethiopian and Eritrean troops was suspended on June 4, 2000. On June 18 the two states signed Peace Agreement. A bit later, the territory of the League of Nations Mandates Rwanda-Urundi, which was under the control of Belgium starting from July 22, 1922, also broke up but in a relatively peaceful way. On December 13, 1946 this former colony of Belgium became the UN Trust Territory under the same governance. On June 27, 1962 a special session of the UN decided to eliminate starting from July 1, 1962 the Belgian protectorate of Rwanda-Urundi, on which territory on the same day two separate states were established: the Rwandese Republic and the Kingdom of Burundi.

As a result of countless religious and tribal conflicts it effectively ceased to exist as a unified state of Somalia. In 2003 in the former colony of British Somaliland (north of the Somali Peninsula) there took place a referendum at which 99% of the population voted for the secession from Somalia and for the adoption of the constitution of a new state of Somaliland. In 2007, another state within Somalia proclaimed its sovereignty - Maahir, but in 2009 this unrecognized state became a part of another self-proclaimed state on the territory of Somalia – Puntland.

In early 2011 a plebiscite was held in Sudan: the South seceded from the North. Six months later a new state appeared on the map of Africa - South Sudan. The essence of what was happening is clear: on the one hand, the Northern Sudan is a stronghold of Islam, and President O. Bashir, clearly sympathizing with Iran, is on the list of persons who have committed crimes against humanity.

Southern Sudan is rich in oil. It should be noted, that a representative of the U.S. Senate D.Kerry had a meeting with the leader of the southerners S. Kiir on the eve of the referendum and promised him full support in building a sovereign state. According to some experts, "the Sudanese referendum is setting a landmark precedent for the “Black continent”. 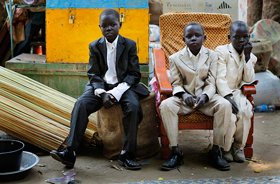 It is quite possible, that the disintegration of Sudan has not been completed yet. In fact, Darfur does not obey the central government; the massacre in the region was halted only after the introduction of peacekeeping forces. In the east, the Beja tribes who do not recognize the power of Khartoum have established a political-military organization called "Beja Congress". Its strategic objective is to create an independent state.

Currently the world is witnessing the actual division of the Republic of Mali with rebellious tribes of Tuareg trying to form of a self-proclaimed state of Azavad in northern Mali. It must be taken into consideration that the Tuareg tribes of nomads migrate across the vast expanses of Sahara and Sahel. The area of their settlement extends into many countries: Algeria, Libya, Mali, Mauritania, Niger, Chad and Burkina- Faso. According to their views, large parts of these countries’ territories are areas of their primordial habitation and they must be alienated in favor of the sovereign Tuareg state of Azavad. Thus, the disintegration of the Republic of Mali may result in a major regional conflict and the redrawing of boundaries of a number of states.

Different in form, but by and large the same situation arose in Côte d'Ivoire in 2011. France stepped in a protracted conflict between the Muslim north and Christian south. French commandos seized the Palace of President L. Gbagbo and handed the power over to the separatist A. Ouattara. It would seem that in this case the disintegration of the country was prevented. But by supporting the rebel A. Ouattara, the French have only exacerbated the situation. The causes that sparked off the conflict have not been sorted out, the integrity of the country is now based only on the French bayonets, and a new confrontation is only a matter of time. 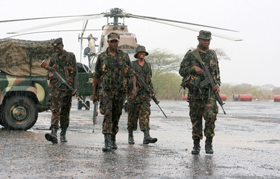 The future of political boundaries in Africa

The XXI century will be the century of breaking the boundaries belonging to actually sovereign states on the African continent.

Since the beginning of this century there has been a strong trend towards the disintegration of existing African states. It can be explained by characteristic features for our era of neo-colonial policies of the world states towards African countries. As of today, there’s unfolding the struggle for some regions, rich in natural resources and / or presenting special interest in military-strategic terms. The support of separatists in these regions is an effective tool to achieve political, military and economic hegemony for one or the other superpower. In a relatively small in terms of territory and population area it is easier to ensure political stability, check Tribal conflict, to protect the borders and to provide a relatively high standard of living.

In the course of the second colonization of the African continent the situation will be changing. As soon as large, stable areas of economic, political and military domination of economically developed countries of East and West Africa are established, the boundaries of the now existing states will lose their meaning and significance. They will be mostly replaced by quasi-boundaries, which in their turn will actually become overseas territories of several new colonial empires.

To measure the configuration of such boundaries is very difficult. Perhaps they will partly coincide with the areas of Anglophone’s and Francophone’s habitation on the African continent. But there is every reason to think that in the distant future there will be large areas where people will be speaking Chinese and Hindi. The only question is when and how the new division of the continent will happen. It is a well-known fact, what the re-division of colonies ended with at the beginning of the last century. If multinational corporations and governments of the world's leading powers are able to agree on joint exploitation of African natural resources, it will be a great boon for Africans and for all the people of the planet.